Tito Livio in his Historiae describes in detail the Etruscan city-state of Veii and its fourteen wars against Rome lasted four long centuries. Veii was a magnificent city known for its monuments, wealth and large number of inhabitants. With Caere (today Cerveteri) was one of the major political and cultural center of the ancient Etruria. It was in Veii that the famous school of coroplastica, the terracotta sculpture, developed. The most famous exponent was Vulca with his wonderful masterpiece “Apollo and Daphne”. According to the most recent theories, Veii gave birth to the first Tomb-Paintings. Veii was the extreme Etruscan bulwark toward Rome and with his defeat the Romans had an easy passage to conquer whole Tuscia. In 396 BC, after a siege which lasted 10 years, the Roman Marco Furio Camillo conquered and plundered Veii completely; the inhabitants were deported and the territory distributed among the Roman citizens. It is said that Marco Furio Camillo conquered Veii with a strategic plan based on digging deep and long tunnels that allowed the Roman army to penetrate inside the city. Slowly the abandoned Veii became a heap of ruins and its traces vanished until the 17h Century, when the two archaeologists Raffaele Fabretti and Famiano Nardini found the ruins of the ancient Veii at Isola Farnese, a town located about 20 kilometers north of Rome. 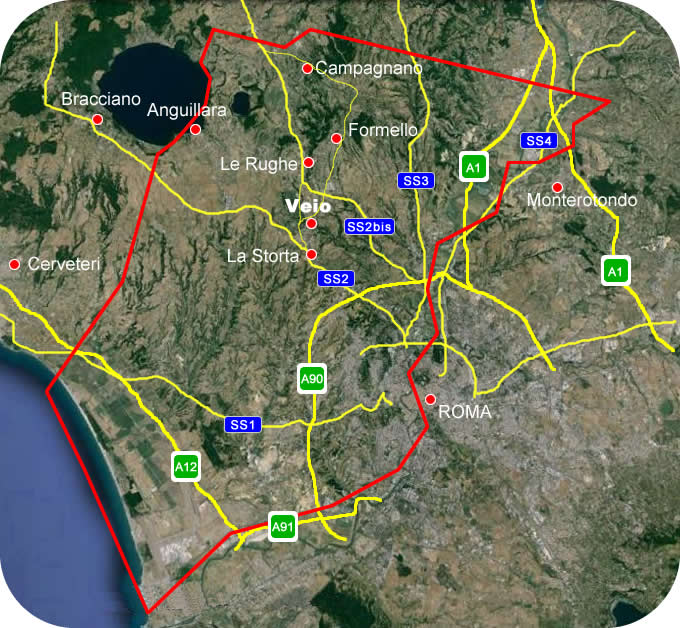 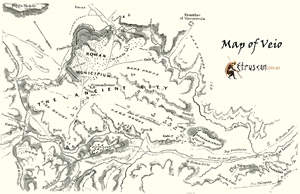 Mao of Veio – Cick to Enlarge