Dionysius of Halicarnassus defined Caere Agilla one of the most ancient Italian cities. According to some authors from Magna Grecia, was founded by the Greeks 300 years before the Trojan war. This, according to Strabo, justifies the intense relationship between Caere and Greece; it seems, in fact, that Caere contributed to the creation of the Apollo temple and its treasure at Delphi. Some studies would suggest that the first sparks of settlements at Caere go back to 1000 years before Christ, well before the emergence of the greatest Etruscan power in Italy. When Caere fell under the Etruscan influence joined the Confederation as a city-state. Soon became one of the most populated Etrusacn cities, with bustling trade with the most important cities of the Mediterranean, thanks to its ports of Alsium (Pale), Pyrgi (Santa Severa) and Punicum (Santa Marinella). At the time of Servio Tullio, 6th king of Rome (from 578 bc to 539 BC ), Caere, allied with Veii and Tarquinia, was engaged in a 20 years long war against Rome. The war ended with the surrender of Caere to Rome that absorbed a considerable part of the Etruscan Lucumonia. In 533 BC the Ceriti supported their allies the Carthaginians by starting a conflict against the Greeks in Corsica, near Alaia, that were interfering trades between the two allies. After the Ceriti’s victory, the Greeks were conducted at Caere, here they were stoned to death near Pyrgi. The legend tells that as a result of this inhuman massacre the town of Caere was punished by the gods with a catastrophic plague that killed men and animals. Caere sent a delegation to Delphi to consult their oracle who recommended the Ceriti to hold Athletic Games, as penitence for the evil action done. These games were held annually, up to 420 BC.
The King of Rome Tarquinius Superbus took shelter in Caere after being exiled by the Romans forcing wife and children to follow him, after 24 years of reign. In 383 BC Pyrgi, port of Caere, and its temples were plundered by the tyrant Dionysius of Syracuse. When in 328 BC the Gauls attacked Rome, Caere became an unexpected ally. This put Caere under the protection of Rome giving the Ceriti all privileges of the Roman citizens, and the possibility to vote. It seems that the latin word “caerimonia” was then coined to remind us of this favorable event. This led to a 100 years truce between the two cities. Most likely this marked the fate of Caere that from city-state became a roman colony. However, the importance of Caere slowly declined and from “illustrious and beautiful” city became an insignificant town. The only ancient vestiges that remained were the Thermae Caeretane frequently visited by the Romans. During the excavations made in the 19th century within the perimeter of the ancient Caere, an inscriptions was discovered describing the city as a Roman Municipium. After the fall of the roman empire, Caere continued to survive but in the 13th century AC the inhabitants moved to a new location five kilometers from the old city. The new town took the name of Ceri and to the old town name was added the adjective Vetus becoming Caere Vetere, today Cerveteri. All that is left of the ancient Etruscan Caere are few walls and the giant wonderful Etruscan Necropolis of La Banditaccia where impressive tumulus tombs are well preserved. 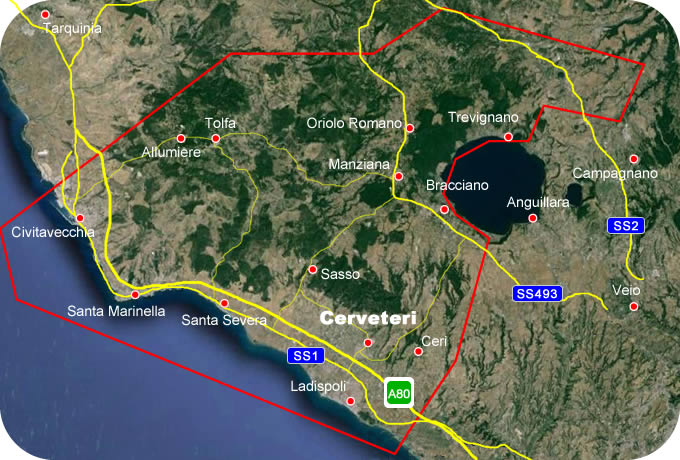 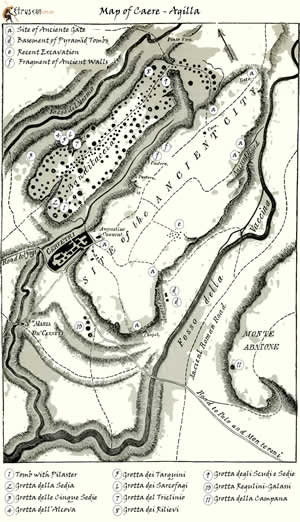