Called Velsina, Velzna or Velsuna as it appears in some etruscan coins and Volsinii by the Romans this city was declared by Tito Livio, together with Arretium and Perusia, as Capital of the Etruria. Volsinii was after Tarquinia city-state more powerful of the Confederation. It is considered to be one of the possible locations of federal Sanctuary of the Fanum Voltumnae. Many times in the war against Rome, Volsinii took part in the etruscan uprising starting from the siege of Sutri (310 BC ) ally of the Romans. It was conquered by the Romans in 279 BC , together with Vulci. The Romans, as happened in other occasions, razed to the ground the city, forcing the Volsinesi to settle elsewhere. Historians of that period tell us that after the defeat the inhabitants, felling too tiring to govern, gave full power to their slaves who imposed their old masters a very tough regime. Evens so, the Romans sent an army to restore order and organize a new government. The ancient writers describe Volsinii as a fortified town that stood on a hill, in a place very different from the present Bolsena. In fact, many historians identify Volsinii with the current Montefiascone, others with Orvieto. Some scholars believe that Volsinii arose in the locality called The di Piazzano, soil rich in findings that denounce the presence of an ancient settlement. The area was built on the steep banks of Lake Bolsena, ideal place for a fortress. In Bolsena were found roman thermal baths dating back to the time of Nero and more recently have been found masonry structures in tuff that have returned materials dated between the VI and the IV century AC. 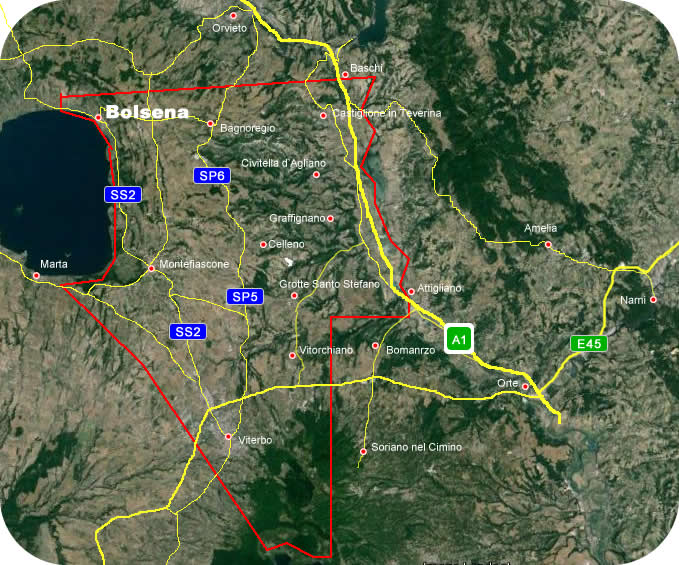