The City of Norchia was named this way probably during the medieval time; its real Etruscan name was probably Orcle. The first discoveries of tombs at Norchia go back to the 1808 and were conducted by Francesco Orioli and the priest Pio Semeria. As we know the Etruscans used to build Necropolis near the Acropolis and Norchia is another example of Etruscan settlement with such characteristics. Its Necropolis lies between Vetralla and Viterbo right where the ancient Via Clodia used to pass; here again the Etruscans build their settlement in correspondence to the convergence of three rivers which are the Pile, Acqualta and Biedano.

In order to reach the Necropolis a way that leads to Cinelli is the easiest because by following the indications it is possible to then find a parking area. From this area proceeding on foot on a dirt road and later going along a path way in the cultivated fields you will end up on top of a gorge edge. From here descending the valley of the river Acqualta it is already possible to admire the vast Necropolis and be welcomed by a wonderful panorama. The rocky tombs of tuff show their magnificent half-cube architecture decorated with frames and bands. Their principal characteristic is that they are built following the topography of the area making this place unique. They are stacked one on top of another, excavated, carved and adapted on the tuff walls. The tombs are built on the sides of five cliffs formed by the three rivers (Biedano, Pile, and Acqualta). Going across this Necropolis there is a road called Via Cava Buia that leads to a plateau where it is possible to find the ruins of Castello di Vico, a church dedicated to St Peter and a Colombarium (type of tomb). As we know the archaeologist George Dennis visited the entire Etruria from the 1842 to the 1847. When passing by Norchia he tells:

In its present state of utter desolation,it has charms as much for the artist as for the antiquary. Who that has visited this spot can forget the ruined church of Lombard architecture, wasting its simple beauty on the stupid gaze of the shepherd, the only frequenter of these wilds? Who that has an eye for the picturesque, can forget the tall cliffs on which it stands here, perforated so as to form a bridge, there, dislocated, and cleft to their base, the rich red and grey tufo half-mantled with the evergreen foliage of cork, ilex, and ivy? Who can forget the deep glens around, ever wrapting loom, where the stillness is broken only by the murmurs of the stream, or by the shriek of the falcon — solitudes teeming with solemn memorial of  a past, mysterious race — with pompous monument smocking their very purpose; for, raised to perpetuate the memory of the dead, they still stand, while their inmates have for long ages been forgotten? 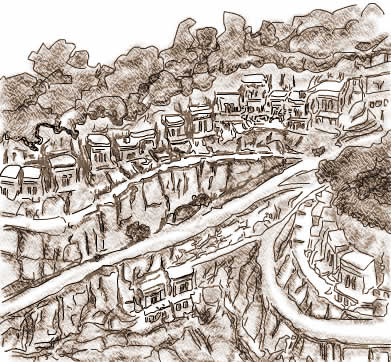 What we would like to point out now it is that in order to reach these wonderful Tombs people have to be careful because of the state of abandon that this site suffer. Examples are damaged signs to the site, the continuous growing vegetation, and the access of improper vehicles that could possibly ruin the tombs.

Visitors are OBLIGED to respect the place and all that is around it.

We would remind the administrations or organisations who have the jurisdiction of this sites that they are OBLIGED to provide surveillance and AVOID that such sacred place suffers further negligence.

We remind again that the first tombs in the Necropolis of Norchia are dated back to the 6th century BC, a heritage that has survived for nearly two thousands six hundred and fifteen years and still survives even though abandoned.