Surrounded by the rivers Biedano, Rio Canale and the Canal Martarello the wonderful Necropolis of Pian del Vescovo displays its magnificence. The actual town of Blera lies right in the valley created by the rivers Biedano and Rio Canale. Blera is amongst the very few Etruscan towns that remained in the original location as the Etruscans had designated.

During the ancient times the city could be reached going through Via Clodia where still today is possible to find ruins of the Etruscan path and bridges actually named Ponte del Diavolo (bridge of the Devil) and Ponte della Rocca (bridge of the fortress). During the Archaic period (7th Century BC) the commercial relationships with Caere favored its flourishing economy and culture. In fact, initially the tombs had a style closer to the tombs of Caere, whereas later on starting from the 5th Century BC the influence from the Lucumonia of Tarquinii rigorously change the style of the tombs to a more archaic design.

The Cube Tombs are stunning to observe; particularly because they are engraved on a rocky slope, built one on top of another and connected by a system of stairs. Their composition looks a lot like the structure of a beehive because of the many tombs entrances near each other that face the River Rio Canale.

An incredible beauty has the lonely tomb that goes by the name of Tomba della Principessa Margareth (Tomb of the Princess Margaret). Going through its dromos its possible to then access in a wonderful sepulchral chamber.

Next to the obscured Via Cava (sunken road) unfortunately closed because of landslides, there is a wonderful Columbarium. Its considerable dimensions and its characteristic disposition make it a unique monument amongst many made by the Etruscans. A lot more difficult is to reach the two Necropolis of Ponton Graziolo and Terrone, these usually refer to as the West Necropolis of Blera and accessible only going through difficult paths. More reachable is the Necropolis della Casetta where visitors can find and admire countless Cube tombs and the Grotta Penta (Penta Cavern) a great chamber with a capital at its centre. Still today, in the ancient walls of this cavern show signs of paintings.

The pioneer George Dennis when visiting the Necropolis of Blera impressed left us these words:

The slope was broken into many ledges, and the cliffs thus formed were full of caverns, sepulchre after sepulchre above, beneath, around us […] here, I felt convinced that they were intentional, and that this assemblage of sepulchres was literally a necropolis, a city of the dead. […] sought to make their cemeteries as far as possible the counterparts of their cities.

We would like to advise that the itineraries and paths to reach these tombs are badly indicated.
What we have seen at these Necropolis is a complete lack of care and indications for the site. The tombs are completely abandoned. 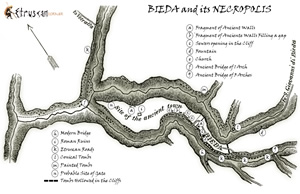