The Necropolis of Barbarano is situated in San Giuliano close to Barbarano Romano and lies right on the regional natural park of Marturanum. 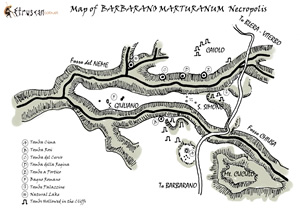 The area is surrounded by three streams (Nemo, Chiusa Cima e Biedano) that create a sort of little gorges. Here, the rocky tombs also immersed in a wonderful forest give a magic atmosphere to those who walk through this place. The Necropolis is probably protected and well preserved thankfully to the bad conditions indications have to reach them. Tombs and vegetation are unspoiled making this place unique. Walking on the paths through the forest, even randomly, the visitor will come across immense funeral monuments excavated in tuff walls that look as part of the forest, nature itself seems to have built them.

To reach this Necropolis visitors have to follow an Etruscan path to then end up in a gorge created by a river. Once arrived to the Necropolis visitors can admire tombs of different periods. There is the Cima’s Tumulus (Tumulo Cima) with different funeral chambers that originally had a distinguishing funeral obelisk which today is preserved at the Museo Archeologico di Barbarano. There is the Cuccumella Tumulus; other tombs such as the Costa’s Tomb (Tomba Costa) typical for its half-cube architecture with two fictitious doors; Geminis’ Tomb (Tomba Gemini) that includes two tombs with sided entrances; Rosi’s Tomb (Tomba Rosi) with its characteristic cube structure; The Queen’s Tomb (Tomba della Regina), another half-cube monument that is ten meters high whose top, where rituals used to take place, is reachable walking on the stairs carved in the tuff; Portico’s Tombs (tombe a portico) are excavated in the tuff walls; The Beds’ Tomb (Tomba dei Letti) possible to admire by walking along an ancient Dromos.

Finally one of the most famous Tombs of the Necropolis of Barbarano, The Deer’s Tomb (Tomba del Cervo) an half-cubed structure that goes by this name because of a bas-relief representation on the tuff wall showing the fight between a Deer and a Wolf. Research demonstrated that the relief goes-back to the IV century BC while the Etruscans (presumably the Deer) were fighting against the Romans (the Wolf). Lots of Etruscan evidences found in this Necropolis are today displayed at the Museo Archeologico di Barbarano.

We suggest to visit the Regional Park of Marturanum because it is part of the Etruscan History and, as such, can give a real experience of contact with nature something this civilization considered sacred, a good place even for meditation .

This Necropolis is surely one amongst many with an incredible suggestive atmosphere, full of architecture accompanied by a feel of mysterious magic.