The Etruscan Discipline is the complex of all spiritual magic techniques and principles the Etruscans used to embrace for their society.
The religiosity was based on two aspects that were the sacred and the divination.

The Sacred aspect was based on the celestial TEMPLUM (augural doctrine of the TEMPLUM). This was an accurate symbolic model of the sacred place where Gods would be living; the Etruscans used to follow this model to build their settlements. So, each borderline or consideration whether it was for temples, cities, fields, for the society (politics, religiosity, the army), or regarding the concept of life expectancy (how long a person, a dynasty, and the entire world would last) was governed rigorously by the Model of the TEMPLUM specifically by considering its structure of divine spaces. Basically, the real world was made as a miniature of the Celestial Universe by the Etruscans.

The function of the TEMPLUM model was a method to make an area, place or location sacred; in this way the area would be purified and saved from negative energies.

The application of this paradigm was done by the Etruscans meticulously; life was redeemed from unholy conditions in all aspects, and then made sacred. Everything from the establishment of a city, the constitution of legal bodies, the creation of borderlines, agriculture, the cult of the dead, the way peace treaties were conducted and wars fought, births, marriages, cultural life etc… each one of these facets in real life had its correspondent location in the organisation of the divine design.

Considering now the Divination aspect, this was focused on the interpretation of various natural signs that could be interpreted according to where in the sacred area the sign occurred. What the Etruscans used to adopt was the following model:

Two perpendicular lines, one called Kardo (the vertical axis, the world axis) and the Duodecumanus (called this way because of the X-mark that forms, in Latin Decussis). Each one of their extremities correspond to a Cardinal point (North, East, South, West).

To be traced Kardo and Duodecumanus, the Haruspex used to adopt a wooden stick called LITUO, later the same stick would be taken as representation of the ‘’Christian pastoral staff’’. Usually this wooden stick was made out from wood without knots on. In order to proceed with the ritual the Etruscan priest would be standing in the position of the Gods, his nape towards North and his face towards South. So, the priest in this way could distinguish the Eastern part on his left (part considered good omen) from the Western part on his right (part considered bad omen), the two parts were separated by the line of the Kardo. In the same way the Duodecumanus was the divider of the ancient events part, and the future events part literally represented by the Sun and the Moon.

Going back to the TEMPLUM model, this was further divided by the intersection of six lines creating altogether sixteen sections; each section was the place of a God, here below a representation: 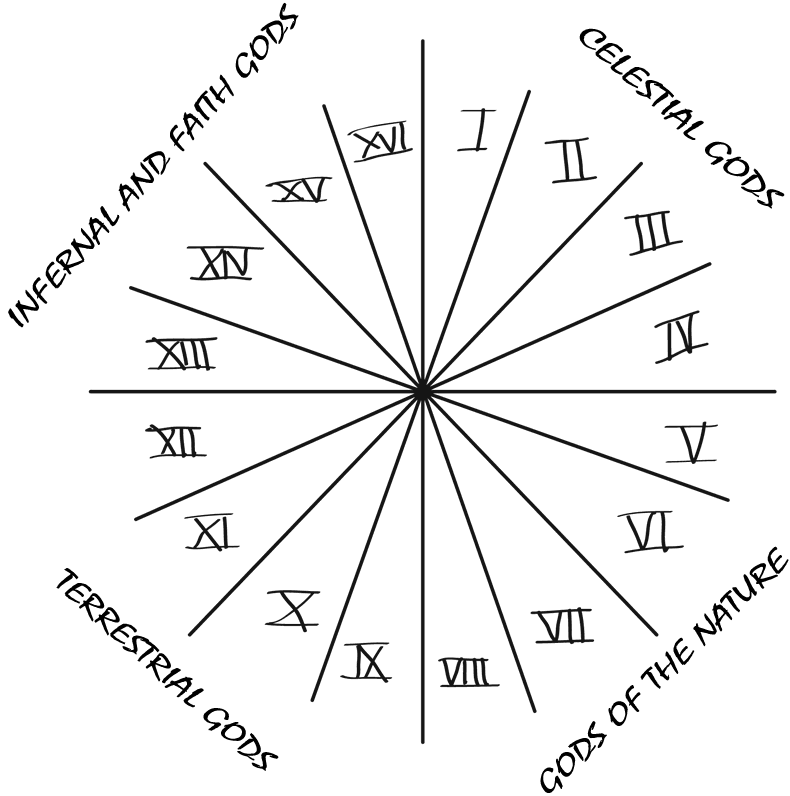 Depending on which section the phenomena would take place (eg.: lightning), the Etruscans knew and could attribute the natural event to the type of divinity; through interpretation of the divine message the Etruscans could predict future events (the vaticinius).

Daya
Daya Sovrana, herbalist, has inherited the love for the herbs, the recipes and ancient remedies from grandmother Beatrice. Owner since 1987 a tiny artisan workshop, she produce with passion a line of products strictly Organic and Vegan. Independent Researcher and studious of esotericism, lives in Tuscia Viterbese, land of mysteries and wild nature that gives her the herbs for its products. Holds lectures and seminars on Goddess civilization and guided tours in unknown places of her magical land.

Latest posts by Daya (see all)